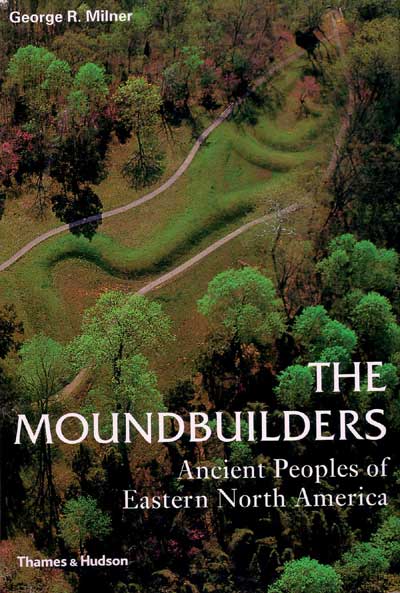 The Moundbuilders
George R. Milner, Thames and Hudson, £28.00
If you go to America, and land on the East Coast, then cross over the Appalachian Mountains, you come down into the huge valley plain of the River Mississippi with its tributaries, the Ohio, the Illinois and the Tennessee rivers. This huge area, nearly 1000 miles in width, is full of archaeology, and in The Moundbuilders: Ancient Peoples of Eastern North America, George Milner, Professor of Anthropology of Pennsylvania State ersity, provides an exemplary addition to the very welcome revival of the Thames and Hudson Ancient Peoples and Places series.
The archaeology falls into three phases. The earliest, the Palaeo-Indians, were essentially Mesolithic. Then from around 3000 BC to AD 400, come the Moundbuilders, otherwise known as the Woodland Culture, or the Hopewell, or the Adena who left behind numerous, often huge, burial mounds. These remained a mystery until the 1930s, when many were meticulously excavated by huge teams of workers employed under Roosevelt’s various New Deal Relief Programmes. From AD 400 onwards, we move into a rather different age of chieftains, often living on top of flat-topped mounds; they are often known as the Mississippian culture, with their best-known site at Cahokia.
How does one put such a range of archaeology into focus? Well, here is the answer. It is a matter of mixing together descriptions of the major sites, with an account of how they were dug – and bringing it all up to date with the latest discoveries and interpretations – and no overt ‘theory’ – though I suspect that ardent theoreticians would claim that the whole book is firmly founded in ‘theory’. Be that as it may, this is one of the best books in the AP&P series – clearly written, well-illustrated with pertinent illustrations, and the very model of what such a text should be. May there be many more such in this series.