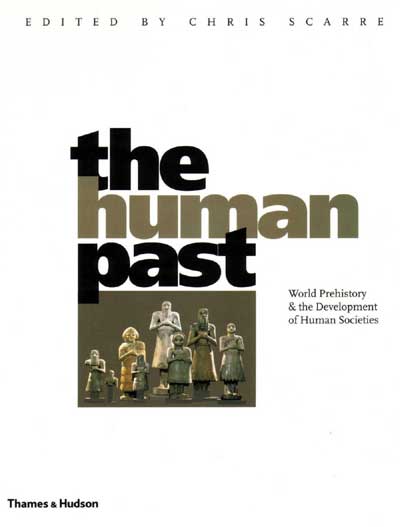 The Human Past is the latest blockbuster from Thames and Hudson. After the huge success of the Renfrew/Bahn Archaeology: Theories, Methods and Practice, Colin Ridler, the quiet mastermind behind the archaeology section at T&H, was faced with the problem of what to do next. The answer was a history of the world, a follow up perhaps to Grahame Clark’s hugely successful World Prehistory of the 1960s and 70s. This new work, however, would be multi-authored, and produced in a methodology that takes at least a nod at techniques pioneered by the internet, with Timelines, Key Sites, Key Controversies and numerous illustrations. The whole thing is magnificently assembled by Chris Scarre, the Deputy Director of the MacDonald Institute at Cambridge, who has done a fine job of putting together nearly 800 pages weighing 2.5 kg, all being sold for remarkably good value for money at £29.95.

Well, having heaped praises on this magnificent achievement, how does one analyse it? Does it hold together? The content of the book and its organisation is to some extent idiosyncratic. It has been described as ‘a triumph of Cambridge imperialism’, with Cambridge trying to impose its own ‘politically correct’ view of the past on the rest of the world. The book is in two main sections; Part I focusing on human origins to the end of the last Ice Age, the second and larger section covering the post-glacial period, the Holocene.

Part I gives an overall view from the ‘out of Africa’ hypotheses down to the controversies over the Neanderthals. However, Part II, After the Ice is in practice divided into two, with the rise from foragers to complex societies being separated off from the rise of civilisation. This leads to some oddities. Thus Australia is given far too prominent a role, – one suspects to appease the PC sensitivities of some modern aborigines and their supporters. Surely the whole interest of Australia is precisely that they resisted the temptations of farming for such a long period. Nevertheless, this is one of the most interesting if perverse chapters in the book, with a notable attempt to use linguistic evidence.

The greatest oddity is their treatment of Holocene Africa where they try and shove the rise of Egypt into the general development of Africa, coming in between the rise of the Bantu farmers in the first millennium AD and the rise of Zimbabwe again in this late period. Yet Ancient Egypt was three millennia earlier and had nothing to do with the Bantu and Zimbabwe! They offer a ‘key controversy’, ‘How ‘African’ was Ancient Egypt?’ which seems a bit strong. . Ancient Egypt may have had some of its origins in the Sahara, but the links – which were frequently strong ones – were all with the Near East, and though they did penetrate down the Nile and to some extent down the Red Sea, yet the Sahara became an impenetrable barrier: as far as I know, not a single object of Dynastic Egypt reached say Nigeria or West Africa in the Dynastic era. In cutting off Ancient Egypt from Mesopotamia, they disrupt the whole rhythm of development of the early civilisation.

Another place where their geographical emphasis leads them astray is in the chapter entitled The Mediterranean World which runs briskly from the Bronze Age through to the end of the Roman Period. Here they aim to redefine its study and get away from the ‘pernicious’ attention paid to the ‘core cultures’; yet surely, there was a major revolution that took place in the 5th and 6th centuries BC going from closed society to open society and the onset of the market economy. Thus in Greece they pass from the Archaic Period to the Classical, shrugging it off with the phrase, ‘once established’ completely ignoring the changes in money and markets and the changes in society marked by the rise of democracy. Indeed money is not mentioned throughout – the traditional academic failing.

Throughout, I noted two major problems; the usual antipathy to any invasion hypothesis, so that where there is a choice between home grown and foreign influence they always tend to come down on the side of the home grown; and there is an antipathy to ‘Dark Ages’, to looking for the ups and downs of human development, which tends to make the narrative a little flat. As a result the whole enterprise is rather shapeless.

One should also perhaps remark briefly on the over-emphasis given to the Americas but that I fear is the effect of modern commercial pressures: the American market is vital if the book is to do well.

Finally should the book succeed? It is targeted first and foremost at the student market – it is aimed to be the only book that a student needs to cover that vital introductory course on ‘the human past’. Will it be too big, so that the first year student drowns? or will it be too generalised for the second or third year student? I would give it a cautious thumbs up. All in all, I feel that this is a book that every reader of Current World Archaeology should consider buying and putting on a stout shelf to act as a permanent encyclopaedia. There will be much to enjoy – in bits and pieces – much to illuminate, especially on the Key Sites and the Key Controversies, and as a quarry for information, it will prove to be invaluable.