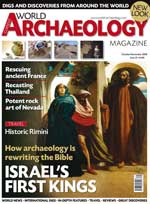 This issue marks our fifth anniversary and in celebration, we have given the magazine a splendid new look.
As ever, we offer the latest on digs and discoveries from around the world, such as our cover feature on how archaeology is rewriting the Bible. According to the Old Testament, David and Solomon were the important kings of Israel. However, Jonathan Tubb, of the British Museum, draws together a wide range of evidence to reveal why this position should be taken by Omri and his son, the ‘evil’ Ahab. Moreover, he explains why this relatively forgotten duo should be seen as the very first kings of Israel.

Bible Lands   Israel’s First Kings: How archaeology is rewriting the Bible
Our cover story reveals why, contrary to Old Testament teachings, the ‘evil’ Ahab and his father Omri should be regarded as the first kings of Israel.

France   Towers and tombs: Neolithic life and Roman death
How rescue archaeology is revolutionising our knowledge of the past.

World   Celebrating world archaeology: CWA is five
It is the magazine’s fifth anniversary, so, in celebration, we look back at some of our most memorable reports from across the world

TRAVEL: Italy special
RIMINI REVEALED: Nadia Durrani reports on the site of the newly-opened Surgeon’s House in Rimini, North East Italy.
On site insights: Romanist Neil Faulkner takes us on a tour of the Roman port of Ostia.
World Listings: Archaeology listings from around the world.

REVIEWS
Exhibitions Who was Hadrian? The British Museum’s latest block-buster considers the life of the enigmatic emperor.
Books The Temple Architecture of India; The Empire and the Kingdom – Jordan as seen by the Ã‰cole biblique et archÃ©ologique franÃ§aise de Jerusalem (1893-1935).

GREAT DISCOVERIES
Great finds that changed the world
Snapshot of the Dead Sea Scrolls and their relevance to world history.